As remote work continues and offices are empty, restaurants on Route 110 are closing 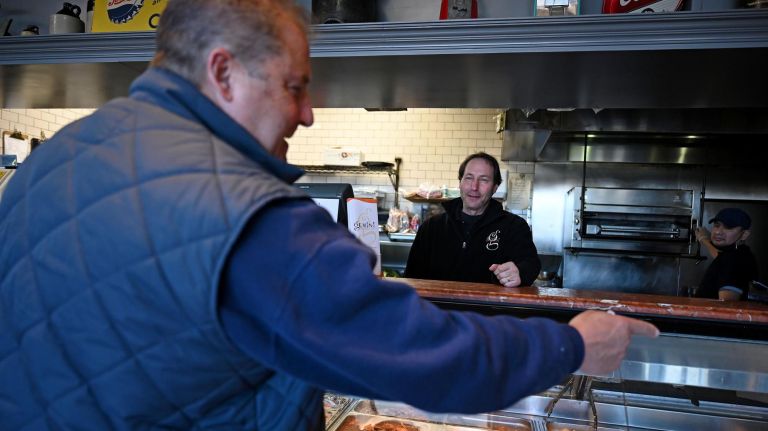 At 12:30 on a recent Wednesday, 10 people stood in line to pay for their lunches of panini sandwiches, pizza and tossed salads at Suburban Eats in Melville. Two cashiers rang up the orders; the telephone was silent.

Two years ago, before the coronavirus forced office employees to work from home, 30 to 40 people would be waiting to pay at the deli’s four cash registers. Delivery orders would be coming in constantly via fax and phone calls.

“A lot of businesses aren’t back in the office at all, and the ones that are have some departments like human resources and finance that are working from home permanently,” said Suburban Eats owner Timothy Caras. “Customers that I used to see five times a week now come in once or twice a week… My business is struggling,” he said.

The 20-year-old deli is among the restaurants and coffee shops in the Route 110 corridor that cater to office personnel and have been decimated by workers’ prolonged absence because of the pandemic.

Some eateries have laid off half their staff and cut other overhead expenses in an effort to survive. Others have closed, unable to hang on until the day when — or if — office workers return in large numbers.

At Suburban Eats, sales are down 40%, Caras said. The number of lunch deliveries has fallen from 30 to 40 per day to 20. Catering orders have gone from 12 to 15 per day to three to five – and they’re smaller, for groups of six to 12 people instead of 40 to 100 people before the virus struck.

Caras has reduced his workforce to 12 from the pre-pandemic level of 25 to 30. But he’s fallen behind on rent payments and has reluctantly put the deli up for sale.

The 110 corridor, stretching for 15 miles in Huntington and Babylon towns, is where more than 150,000 people used to work, according to studies by Babylon and the think-tank Regional Plan Association in Manhattan.

The biggest offices are between the Northern State Parkway and the Southern State Parkway. The corridor is the largest concentration of office space in Suffolk County, with nearly 9 million square feet, according to commercial real estate brokers.

The 110 office parks, like other centers of work that were deemed “nonessential” in the pandemic’s worst days, shut down on Sunday, March 22, 2020 at 8 p.m. by order of then-Gov. Andrew M. Cuomo. He lifted what he called “New York State on PAUSE” after 12 weeks, but most offices stayed deserted for another year or more as new COVID-19 variants forced employers to repeatedly change their return-to-office timetables.