Demand from Amazon, others, fueling plans for 11 million square feet of new warehouses on LI

DGNY Commercial > DGNY Commercial In The News > Uncategorized > Demand from Amazon, others, fueling plans for 11 million square feet of new warehouses on LI 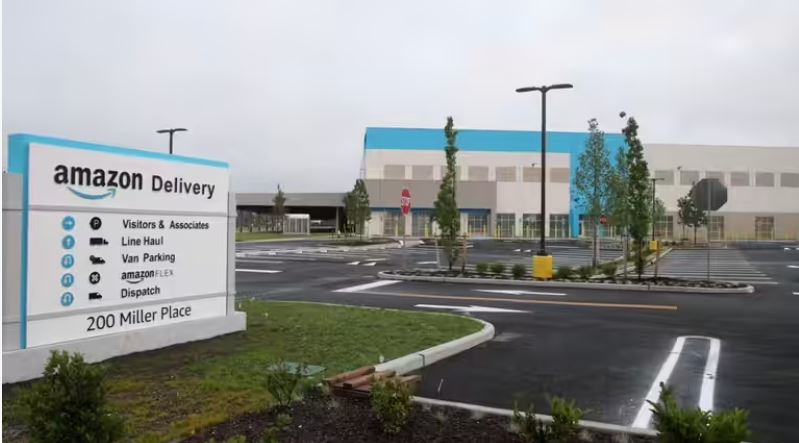 More than 11 million square feet of warehouses have been proposed for Long Island by developers looking to profit from record-low vacancy rates, high rents and the seemingly insatiable needs of Amazon and other businesses for storage space.

The new projects together would equal more than 25 Nassau Coliseums.

Commercial real estate companies plan to spend more than $2.4 billion on 25 warehouse projects from Woodmere to Westhampton Beach, according to data compiled by Newsday. Most of the facilities are slated to open later this year or in 2023 and 2024.

But whether all the proposed warehouses move from blueprints to shovels in the ground is far from certain. Experts said the market could become oversaturated as potential tenants reconsider their space needs because of the slowing economy, a reduction in consumer spending and higher interest rates.

Few of the projects have tenants yet. The exceptions are in Melville, Syosset and Woodmere, where Amazon has signed leases for buildings that will be used to deliver packages on the “last-mile” to customers’ doorsteps, the database of publicly-announced projects shows.

The planned buildings — unlike the Island’s existing 180 million square feet of industrial space that was built decades ago — will have what firms are increasingly looking for: high ceilings, fewer internal columns holding up the roof, lots of truck bays and ample parking, according to the experts.

They said multiple factors are behind the warehouse boom.

“We’re adding a significant amount [of warehouse space] at one time, and one of the reasons is last-mile delivery by Amazon and others — but that’s not the only thing that has been happening,” said David Pennetta, executive managing director of the Long Island office of Cushman & Wakefield real estate brokers.

He said the number of warehouses has declined in the past few years as some are demolished to make way for apartments and offices, often near train stations in downtowns. At the same time, national companies want to open distribution centers here to serve the metropolitan area, and companies from New York City are seeking space in Nassau and Suffolk counties.

“So, you have a contraction of supply,” Pennetta said.

Pennetta and others also credited the Home Depot warehouse on Duffy Avenue in Hicksville with causing international and national development companies to see opportunity in a region that they bypassed for decades.

The 195,610-square-foot facility was constructed in 2019-20 by Lincoln Equities Group LLC of East Rutherford, New Jersey. Lincoln then quickly sold the building for a record amount after negotiating a lucrative rental agreement with Home Depot.

“It was the first new speculative industrial property built on Long Island in 15 years and [the owner] wound up getting almost double what the market was in rent,” Pennetta said. “That big jump up in rent got people’s attention and sort of started this big rush” of warehouse construction.

Venture One has been studying Long Island for more than two years as part of a larger strategy to expand beyond its Midwest base, said Brian McDonagh, a company vice president.

He said Venture One plans to build a total of 320,416 square feet in three warehouses — two along Veterans Memorial Highway in Bohemia and Ronkonkoma and another in the Hauppauge Innovation Park. Together, they will cost $89.5 million.

“We saw an opportunity to really deliver additional cost savings to corporate users who manufacture on the Island and those trying to serve the Island from New Jersey or the city,” McDonagh said, citing a 50% increase in freight costs because of higher gasoline prices and the shortage of truck drivers and warehouse workers.

Venture One also has been acquiring small warehouses in Suffolk but has no interest in converting vacant big-box stores, malls and strip shopping centers to distribution centers.

“The dollars that you would need to invest in those structures to make them functionally usable, a lot of times it doesn’t make sense…Better to scrap them and start over,” McDonagh said. “The other issue is that a lot of brick-and-mortar retail sites on Long Island don’t have direct access to the LIE, which is incredibly important for industrial/warehouse development because trucks cannot use the parkways.”

Half of the two-dozen proposed warehouse projects are near the LIE, some less than a mile from an entrance ramp or along the Service Road, according to the Newsday database.

Developers from outside of Long Island aren’t the only ones diving into the local warehouse market.

Last year, BEB Capital in Port Washington formed a joint venture with the Rockpoint Group, a private equity firm in Boston, to purchase up to $1 billion in existing warehouses, factories and offices in the Northeast, “with a primary focus” on Nassau and Suffolk, according to executives.

“There’s a significant pipeline [of proposed warehouses] that Long Island has never seen before,” said Lee J. Brodsky, CEO of BEB, which his father started in 2017. The joint venture “allows us to move quickly to acquire existing [buildings] ahead of the completion of the new construction” by competitors, and to hopefully snag additional tenants.

Brodsky said demand for spaces under 100,000 square feet, his company’s specialty, remains robust. “We haven’t seen a leasing slowdown, though we are reading about change in e-commerce strategies,” he said, referring to online retailers that are scaling back their warehousing plans.

With slower growth in online shopping compared with 2020’s feverish pace, Amazon has moved out of some of its warehouse space nationwide. The retailer is not renewing leases or terminating them early, and in some cases, subleasing space to others.

Amazon has plans for at least nine last-mile warehouses in Nassau and Suffolk – but it’s also closing its warehouse at 201 Grumman Rd. W. in Bethpage this summer.

About 500 affected employees will be transferred to other sites, notably a new 204,000-square-foot facility on the former Cerro Wire site in Syosset. The Bethpage location, which is 161,360 square feet and was built in the late 1990s for Goya Foods, has been used for Amazon deliveries since 2016.

“We continually evaluate our operations network to ensure our buildings provide a modern, engaging and technologically-advanced environment that creates the best possible experience for our employees and our customers,” said company spokesman Steve Kelly. “In some cases, as with our Bethpage delivery station, the best option for our employees and customers was not to renew the lease of an older facility.”

The ranks of warehouse workers, couriers and messengers have swelled since 2017, according to Shital Patel, an analyst at the state Department of Labor’s Hicksville office.

The courier/messenger sector, which includes package delivery, has added even more jobs: up 2,730 from its pre-pandemic level to 10,930 last year, Patel said.

Later this year, Amazon is expected to begin operations at a new 91,000-square-foot warehouse in the Hampton Business District, near Gabreski Airport in Westhampton Beach. The district is being developed by Rechler Equity Partners of Plainview, which says it’s Long Island’s largest owner of commercial property, with 6.5 million square feet in more than 100 buildings.

Mitchell Rechler, the firm’s co-managing partner, said it’s happy to have Amazon as a tenant, but is focused primarily on meeting the needs of local manufacturers and distribution companies.

“Amazon entered the market a few years ago and it drew a tremendous amount of local media attention for good reason,” he said. “But that’s not what the market is all about… Many of our tenants have expanded over the last few years” and rented additional warehouse space to accommodate their increased sales and to stockpile materials because of supply chain disruptions.

Rechler Equity tenant East/West Industries Inc., a defense contractor in Ronkonkoma, leased an additional 27,000 square feet of warehouse and production space in a multi-tenant building on Orville Drive North in May. The building has been home to the East/West office and factory for six years but the company’s warehouse was across the street.

Teresa Ferraro, president and CEO of East/West, said having its operation under one roof, in 75,000 square feet, is critical to winning new orders from aerospace giants such as Boeing, Lockheed Martin, Northrop Grumman and Sikorsky. East/West, which has 88 employees, produces seats for military helicopters and airplanes and survival kits with oxygen for air crews to use in emergencies.

“If we didn’t show growth and expansion, they probably wouldn’t have given us additional contracts,” Ferraro said, adding her customers want their suppliers to have ample warehouse space and orderly production processes. “It’s a risk to them if we are busting at the seams.”

Gregg Rechler, co-managing partner and Mitchell’s cousin, said many of Rechler Equity’s tenants are in need of additional space.

That’s why the firm is proposing the fourth-largest project in the database based on square footage: Rechler Business District, to be located off Horseblock Road in Medford. The $220 million project will consist of 845,000 square feet over six or seven buildings.

The $506.5 million project, to be built on land owned by Winters Bros., consists of 2.5 million square feet over four buildings. It differs from all the other planned facilities in that it has a railroad link as well as proximity to the LIE.

Kyle Strober, executive director of the developers’ group Association for a Better Long Island, said the rail link provides multiple benefits, including that “consumers will receive products faster while usage of freight rail will reduce the number of trucks on our roads.”

Lisa M.G. Mulligan, CEO of the Brookhaven Town Industrial Development Agency, agreed, adding the IDA awarded NorthPoint and Winters Bros. $73.5 million in tax breaks over 15 years because of the project’s rail component and potential to create up to 1,300 jobs.

“I don’t have a lot of projects that come across my desk that say, ‘as a result of this, there will be more than 1,000 people employed,’ ” she said.

Still, the Brookhaven IDA has commissioned a study to determine how many new speculative warehouses are needed in Suffolk, with an eye toward preventing a glut of unused space. Many of the 25 announced projects have either won tax breaks from Long Island’s eight IDAs or applied for them.

“We felt that we needed a better understanding of how much [warehouse space] can be absorbed – where is the tipping point,” Mulligan said.

Experts said economic forces, such as inflation, difficulty in obtaining financial backers and a possible recession, will determine whether all the blueprints become buildings.

“Not everything that’s on the table right now is going to move forward,” he said. “The market will self-adjust. There’ll be a natural correction, not a crash.”