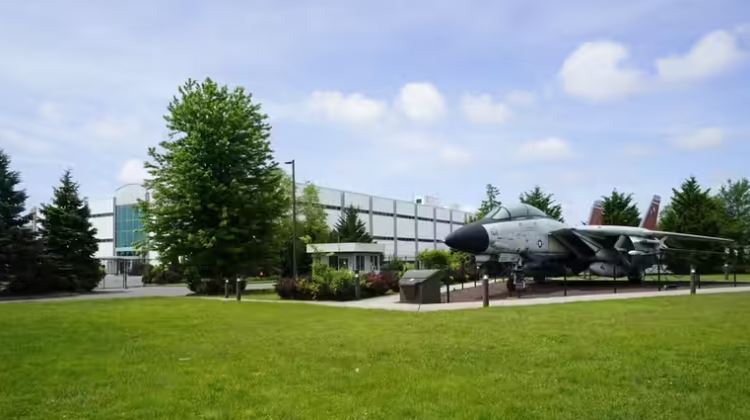 A California development company wants to demolish a former Grumman office building in Bethpage to make way for a 239,000-square-foot warehouse, executives said.

Prologis Inc., a public company based in San Francisco, has signed an agreement to purchase 600 Grumman Rd. West. On the property, near the vacant 218,150-square-foot office building, is a historic Navy F-14 Tomcat fighter jet that was built by aerospace giant Grumman Corp. in Bethpage in 1992.

An attorney for Prologis said the company hasn’t yet decided how, or if, the F-14 will be included in the redevelopment project. In 2008, the jet was lent to the Grumman Retiree Club, a former employees’ group, by the National Museum of Naval Aviation in Pensacola, Florida.

As for the proposed building, Prologis development director Jonathan Payne said it could house one or more tenants and create a minimum of 10 to 50 jobs.

“We would look to have a multi-tenant scenario or a single tenant scenario, depending on user interest,” he told a meeting of the Nassau County Industrial Development Agency.

Prologis is seeking 20 years of IDA tax breaks for the project, including a sales-tax exemption of up to $2.7 million on the purchase of construction materials and equipment. In April, the agency’s board voted unanimously to negotiate an incentive package with the developer.

The project, estimated to cost about $100 million, would be Prologis’ first on Long Island, though others could be in the offing, said Chi Osu, a company vice president.

“We think the market here is underserved and we are interested in expanding further into Long Island, depending on how this project goes,” Osu said, responding to a question from IDA chairman Richard Kessel.

Prologis owns 1 billion square feet of warehouse and industrial space in 19 countries. Its buildings are rented by about 5,800 companies, including Amazon, FedEx, Target and United Parcel Service.

Prologis operates as a real estate investment trust, or REIT, with shares traded on the New York Stock Exchange. It reported a profit of $3 billion last year on revenue of $4.8 billion. The company’s workforce totals about 2,000 people around the world, according to securities filings.

Daniel S. Dornfeld, Prologis’ real estate attorney, said it would not pursue the Bethpage project without tax breaks. “It’s not happening without the IDA’s assistance,” he said.