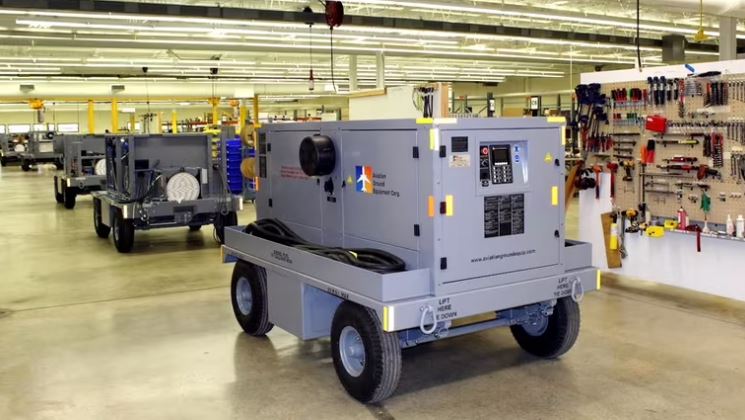 A Melville maker of ground power units for aircraft has won a nearly half-billion dollar, 10-year contract from the Defense Department after a lengthy pursuit.

The company, Aviation Ground Equipment Corp., plans to add 45 to 60 new hires over the next 18 months, more than doubling its current 38-person head count.

“Everything is going to get bigger,” Barry Spilka, Aviation Ground Equipment’s president, said of the $482 million contract. “I’ve been working on this specific program — just this — for five years.”

He called the contract the biggest he’s seen in Aviation Ground Equipment’s sector.

“I’ve never seen a contract in my industry a quarter of this size,” Spilka said. “It’s pretty rare that I see something that’s half a billion dollars … unless you’re one of the top 100 Defense Department contractors.”

The indefinite delivery and indefinite quantity contract issued by Robins Air Force Base in Georgia runs until mid-November 2032. The contract was announced by the Defense Department last month.

Indefinite delivery, indefinite quantity contracts are commonly awarded by the federal government to defense contractors. They allow the government to designate funding year by year while providing flexibility if needs change.

Eight bidders competed for the contract, the Defense Department said.

Aviation Ground Equipment, founded in 1984, will deliver a variety of ground power units and universal load banks, which are used to test and maintain the power units.

In flight, an aircraft’s engines provide electrical power for its systems, but when it is parked, a ground power unit can provide electricity for maintenance, technical checks and systems to allow passengers to board and disembark.

Aviation Ground Equipment, founded as an airport service and maintenance company, gradually expanded to manufacture its own equipment for government contracts, including branches of the U.S. military, the company said.