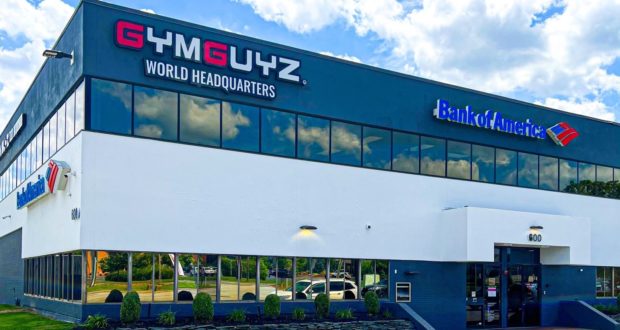 GYMGUYZ, a growing mobile fitness company has expanded in Melville after purchasing an office property for $3.5 million.

The business has relocated from leased space in Plainview to the 18,000-square-foot building on .92 acres at 600 Broadhollow Road the company acquired a few months ago.

GYMGUYZ has so far invested another $400,000 in renovations to the property, where it occupies the second floor and basement. Bank of America leases about 8,000 square feet, mostly on the Melville building’s first floor.

The company’s founder is Josh York, a former personal fitness trainer who grew up in New Hyde Park. After graduating from Long Island University in Brookville, York took a marketing job, but he soon decided to return to the personal training business.

York started the mobile training company out of his parent’s dining room in 2008, spending his life savings of about $15,000 to buy a Ford E250 van that he filled with exercise equipment. Five years later, York began franchising the concept and it has been flexing its muscle ever since.

Today, GYMGUYZ, which stands for “Get You Motivated Goals Uniquely Yours Zero (excuses),” has sold more than 150 franchises that serves nearly 1,000 cities across the U.S., Canada and the U.K. York says the company has 40 more franchise in the pipeline for 2022 and it expects to add between 75 and 100 more franchise locations next year.

“So many people told me it was a stupid business model and that I should just open up a gym,” York told LIBN. “All those detractors never stopped my drive and determination.” ‘

The new building will feature a training facility to train the company’s franchise partners and corporate team members, as well as a content studio with a set that recreates a client’s home for training. It took York 15 years to have windows in his office, after staring at basement walls all that time.

“Now we have an actual world headquarters, from which we’ll sell tons of franchises,” he said.

The cost of a GYMGUYZ franchise ranges from $66,000 to $131,000, depending on the size of the territory. For their investment, franchisees get a fully-appointed van packed with 365 pieces of workout equipment, including free weights, trampolines, battle ropes and other gear trainers bring to each client’s location. In addition, franchisees receive proprietary management software, local phone number, website and several days of training.

GYMGUYZ charges $85 to $105 per mobile workout for individuals and also offers group training.

“Due to demand within the last two years, we’ve expanded our services heavily into the business-to-business sector, adding corporations, senior living facilities and condo communities to our client list,” York said.

The company has made lists of fastest-growing franchises and earned other accolades in the last several years.

“But the best reward is when you get a call from a mother of an autistic child who was functioning at a low level and now because of our workouts is functioning at a higher level,” York said. “We’re in the business of helping people. It’s great to make a living, but it’s much better to make a difference.”