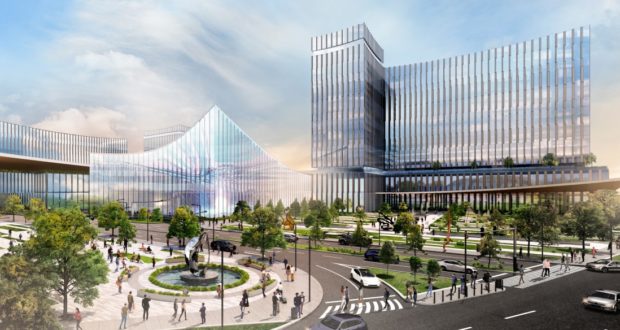 Las Vegas Sands plans to purchase the long-term lease of the Nassau Coliseum site to develop a “multi-billion-dollar” casino and entertainment project at the Uniondale property.

Sands, which has been lobbying heavily to snag one of the three downstate casino licenses, will partner with RXR on the planned project, as RXR remains the master developer of the Coliseum site. But Sands will now take the lead on the project which will center around the casino.

Sources say Sands will be purchasing the Long Island Marriott next door to the Coliseum site, as part of its overall casino plan.

The resort components of the proposed redevelopment would include “outdoor community spaces, four- and five-star hotel rooms and a world-class live performance venue honoring the long legacy of live music at the Nassau Coliseum,” according to a Sands statement. The plan includes “celebrity chef restaurants, experiential events and venues and flexible meeting and convention space, including ballrooms,” Sands says.

The actual casino is planned to occupy less than 10 percent of the project’s total square footage.

“Our company’s track record of driving significant economic benefits to the communities in which we operate and the meaningful relationships and partnerships we have created in each of those communities gives us a unique perspective on what it takes to develop transformative tourism destinations that positively impact the local community,” Robert Goldstein, Sands chairman and CEO said in the statement. “Based on that experience, we strongly believe Long Island can be home to one of the region’s great entertainment and hospitality developments.”

Goldstein added that the proposed project would produce “tens of millions of dollars” in annual tax revenue along with thousands of union jobs in both construction and operations.

“But the challenge for turning this vision into reality has always been the commercial viability of a site encumbered by a nearly obsolete half-century-old arena,” Rechler said in the statement. “The plan envisioned by Sands is a once-in-a-generation opportunity to create the kind of world-renowned entertainment and hospitality destination that has been sought after by Long Islanders.”

RXR had pitched a $1.5 billion mixed-use redevelopment of the 70-acre Coliseum site, but that was put on hold once casino plans heated up. Even if Sands does not get the sought-after casino license, the project will go forward as a hospitality and entertainment complex without gaming.

The state began accepting proposals this month for three full-fledged casinos in the New York metro area, though it’s not yet clear where they will be located. Many observers expect one will likely go to the existing Empire City Casino in Yonkers and another will be sited at Resorts World in Queens. Casino groups have pitched sites like Hudson Yards and Times Square in Manhattan, Coney Island in Brooklyn and Willets Point in Queens, among others.