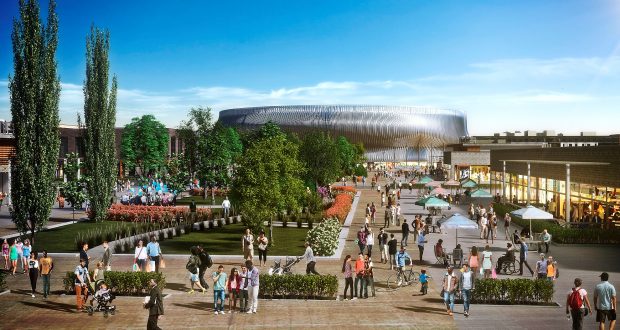 RXR has received a 60-day extension from Nassau County on a $1 million payment that’s part of its agreement to redevelop the Nassau Coliseum property.

The benchmark payment was due at the end of August, but RXR now has until the end of next month to pony up the money.

RXR has proposed a $1.5 billion plan to redevelop some 70 acres around the Coliseum. The project includes a mix of housing, office space and an entertainment component with retail and restaurants for the Uniondale property.

An RXR spokesman told LIBN the company will be paying the $1 million to the county and is fully prepared to move forward with its plan. RXR entered into an escrow agreement with the Town of Hempstead in April 2021 so that the town’s planning consultant, FP Clark, could work on the project’s environmental review and the review of the developer’s conceptual master plan for the Nassau Hub, which had been delayed by the COVID-19 pandemic.

“We’ve submitted everything with the town, the town’s been reviewing and now we’re just waiting for the town to act,” said the spokesman.

Hempstead Town officials have not responded to several requests for comment on the status of its review or why its review process has taken this long.

Sources say that both the county and the town have fielded interest from firms eyeing the Coliseum property as a potential site for a casino, though the RXR spokesman maintains that their plan does not contemplate a gaming facility as part of its project.

However, RXR is exploring the possibility of a redevelopment without the Coliseum, as the venue has struggled to attract events amid competition from the new UBS Arena at Belmont Park.

A spokesman for Coliseum leaseholder Nassau Live declined to comment.

Whether it’s with or without the arena, RXR CEO Scott Rechler said his company is still moving forward to redevelop the Coliseum property.

“The pandemic may have spurred structural shifts in how we live, work, and operate, but my commitment to a new vibrant Nassau Hub in the heart of Long Island has never wavered,” Rechler said via email. “We are working hand-in-hand with the county executive and the town supervisor to turn this vision into a reality.”