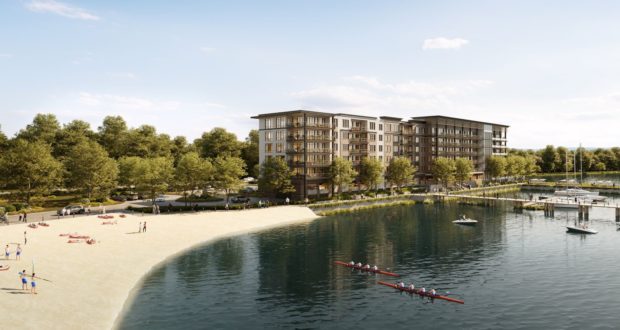 Southern Land Company has submitted a draft environmental impact statement to the Town of North Hempstead for its proposed $130 million luxury rental project in Port Washington.

The project at 145 West Shore Road would bring a seven-story, 176-unit apartment complex to a blighted 7.1-acre waterfront site on Hempstead Harbor. Plans include a massive cleanup of the property that had been used for loading barges with sand from long-abandoned mining operations across the street. The remediation, which could cost the developer as much as $15 million, will include the removal of two sunken barges and 50 tons of contaminated steel and creosote pilings that have turned the property into an eyesore.

The company’s DEIS maintains that the development will decrease the potential for soil erosion and minimize irrigation demands to help conserve and protect water; increase population of birds and other local wildlife on the site; and provide a net increase in tidal wetland habitat.

In addition, the DEIS says its traffic study found that “traffic generated by the redeveloped site can be accommodated on the adjacent roadways and intersections without significant negative impacts to traffic conditions.”

The development will also feature a shuttle service running to and from the Port Washington Long Island Rail Road station during peak hours to cut down on rush hour traffic, according to the DEIS.

The proposed redevelopment is expected to produce about 14 school-aged children, limiting any adverse impacts on the Port Washington School District. The DEIS states that the school district’s cost for the added children would be offset by a $1 million upfront payment to the school district by the developer and an additional amount of $16 million to be allocated to the district via property tax revenue.

“The findings included in this draft environmental impact statement confirm that our vision for 145 West Shore Road will make Port Washington a better place to live by undertaking a multimillion-dollar clean-up of this property, providing newfound tax revenue, and offering members of the Town of North Hempstead community an opportunity for quality living and gathering space,” Southern Land Company Founder and CEO Tim Downey, said in a company statement. “What currently sits as an undeveloped property in the community that is affecting the local ecosystem will be transformed into a beautiful development, complete with plentiful green space and amenities for all to enjoy.”

The development site is currently owned by the Scotto family, which will own a percentage of the project. The plan for the property features about 55,000 square feet of public space, which includes a 500-foot-long public promenade connecting the adjacent North Hempstead Beach Park, a public pier that can hold community events and a public marina with 20 to 30 boat slips.

The proposed complex will have 300 parking spaces, with 242 spaces in two below-grade levels and 58 surface spaces that will be open to the public. It will also include a 40-kilowatt solar array to power the parking garage and common areas.

“We are committed to being good stewards of the community and adding value to local businesses and residents of the area,” said Joseph Rossi, Southern Land’s northeast director of acquisitions.

Monthly rents at the Port Washington development are projected to start at $3,500 for a one-bedroom apartment and go up as high as $11,000 for a penthouse residence. Ten percent of the units will be priced as workforce housing for people making up to 80 percent of the area median income.

Southern Land will be seeking economic incentives from the Nassau County Industrial Development Agency for the Port Washington complex. Currently, the site pays $361,130 a year in property taxes. If approved for IDA benefits, the developed property is expected to generate more than $28 million in taxes over 20 years.