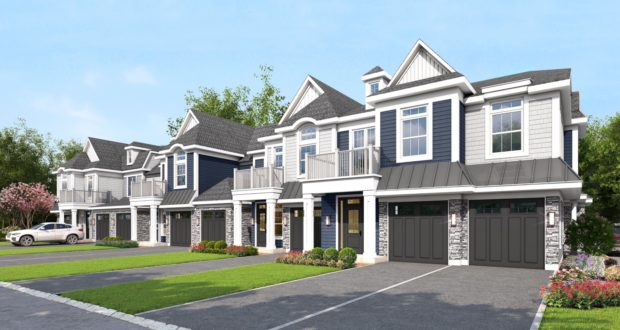 The Beechwood Organization is pitching a plan to build 385 townhomes on 55 acres of vacant land in Elwood.

The company has applied to the Town of Huntington for a zoning change that would allow for the development of the proposed community called Country Pointe Elwood, which would be restricted to people age 55 and over.

The property just east of Manor Road on Jericho Turnpike had been the site of a proposed mixed-use project from Great Neck-based developer Kris Torkan, who withdrew his application for a zoning change in 2018 after pushback from community groups.

Torkan’s $100 million plan, called Elwood Orchard would have created a 470,000-square-foot retail and office complex on nearly half of the property owned by the Mediavilla family, much of which has operated as an orchard for more than half a century. The project would have replaced a small four-store strip center on the corner of the property and large sand hills that have been mostly used by dirt bikers and ATV riders.

Beechwood’s zoning change application for the Elwood site comes on the heels of a statement released earlier this week from Huntington Supervisor Ed Smyth about curbing development in the town.

“I campaigned for the supervisor’s office on many issues, including stopping the overdevelopment of Huntington. In 2020, I co-sponsored a measure limiting the expansion of multi-story apartment development in our downtown areas,” Smyth said in the statement. “The town cannot stop property owners from asking for a zoning change or a new use for their property, however the town has no obligation to advance any proposal.”

“He wants to stop overdevelopment. I don’t think our application falls into the bucket of overdevelopment,” Dubb told LIBN. “The existing zoning of the property is residential, and we are proposing a type of residential use that we think is better suited and more needed by town residents than the existing residential zoning.”

Dubb continued that the Beechwood plan would be less intensive for the area than the project that Torkan had pitched.

“It’s going to be, from a traffic perspective, far less traffic than the prior proposal,” Dubb said. “From a school tax point of view, the development would provide millions of dollars a year in school taxes to the school district without providing any additional burden to the school district with any additional children. By and large, I feel that this type of age-restricted housing is desperately needed on Long Island. I don’t think what we’re doing is overdevelopment, I think it’s smart development.”

Dubb added that the company will be reaching out to the Elwood community on its proposal.

“We’re going to have extensive meetings with the community and get their input and that will shape our application,” he said. “This isn’t done in a vacuum.”