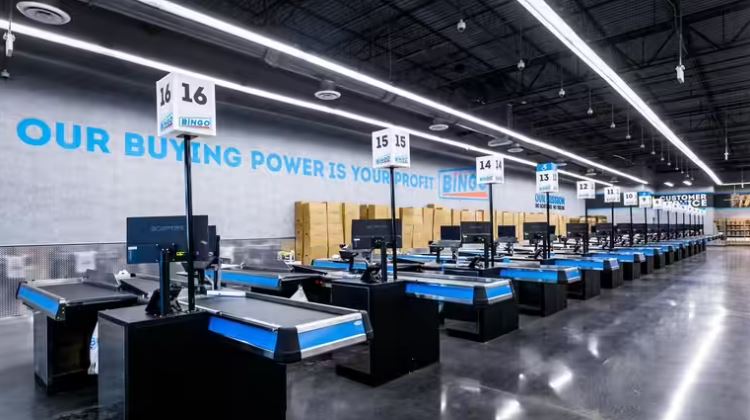 A discount grocer nicknamed the “Kosher Costco” is headed to Long Island.

Bingo Wholesale plans to open a store in the Burnside Commons shopping center in Inwood, in a space that a Stop & Shop supermarket vacated in 2020.

“I want to … bring our wholesale prices in the supermarket business to that community,” said David Weiss, a principal at Bingo Wholesale.

Having leased 61,669 square feet at 603 Burnside Ave., Bingo Wholesale would be the largest tenant in the 100,219-square-foot Burnside Commons, according to Urban Edge Properties, the Manhattan-based real estate investment trust that owns the shopping center.

Both Urban Edge and Weiss declined to say when the new store is expected to open.

Bingo Wholesale has three stores, the first of which opened in Brooklyn in 2016. The other two stores are in Lakewood, New Jersey, and Spring Valley, New York, which is in Rockland County.

The retailer is affiliated with Osher Ad, a chain of 20 supermarkets in Israel.

“It’s [like a warehouse] club without paying membership,” Weiss said.

The retailer will bring a new concept to the area in response to high demand, Scott Auster, senior vice president and head of leasing at Urban Edge, said in a statement.

“A large-format kosher grocer with great prices is an ideal use for the local community and complements other essential offerings in the center,” he said.

Kosher food is defined as meeting the requirements of Jewish dietary law.

Kosher restrictions include not consuming meat that comes from animals that do not have split hoofs and do not chew their cud. Also, seafood that lacks fins and scales is prohibited.

One of the reasons Inwood was chosen for Bingo Wholesale’s new store is that it has a high percentage of Jewish residents, Weiss said.

The Five Towns’ percentage of Jewish residents, an estimated 80%, is higher than anywhere else on Long Island, Rabbi Zalman Wolowik, director of Chabad of the Five Towns, a Cedarhurst-based community social services center that includes a synagogue, told Newsday in 2020.

The Stop & Shop that was in Inwood relocated 1.3 miles away to Woodmere in October 2020.

The 20-year-old store was moved because its lease was expiring and Stop & Shop wanted to expand the store’s offerings, which included a large selection of kosher products, the retailer said.