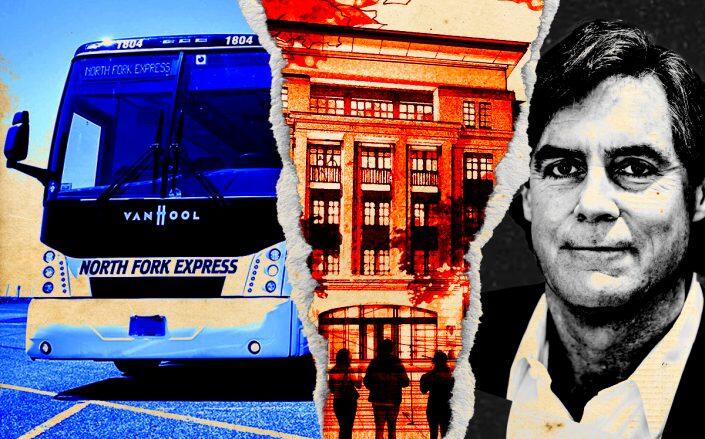 A developer may be forced to pump the brakes on a massive mixed-use project in Ronkonkoma, as a bus company owner is refusing to yield to an attempted seizure by eminent domain.

A depot operated by charter bus company North Fork Express stands in the way of the second phase of Tritec Real Estate’s $750 million Ronkonkoma Hub project, according to Newsday. Tritec has asked the Brookhaven Town Industrial Development Agency to condemn the depot, which sits on a 2.2-acre site on Hawkins Avenue near MacArthur Airport and Ronkonkoma’s Long Island Rail Road Station.

The IDA will hold a virtual public hearing on the issue Wednesday.

Municipalities use eminent domain when attempting to seize a property for a public purpose, such as parks or affordable housing. The Fifth Amendment requires municipalities to give owners “just compensation” for seized properties.

North Fork Express owner Greg Mensch said he could be willing to negotiate, but isn’t happy with the offer he’s received from Tritec.

A spokesperson for Tritec said the firm prefers to negotiate.

Both sides have leverage. On the one hand, the town can seize the property and pay fair market value determined by an appraiser, which would result in Mensch losing the property, perhaps for less than he’d want for it. But Mensch could mount a legal defense and drag out the eminent domain process, driving up the project’s costs.

The initial phase of the Ronkonkoma Hub project wrapped up two years ago and the first tenants moved in three years ago. The second phase is expected to add 388 residential units, 74,000 square feet of retail, 17,000 square feet of offices and a village square for events.

In December, the IDA approved condemning more than a dozen properties, mostly small businesses, for the project. When the project was approved in 2014, the town and Tritec had said they had no plans to use eminent domain to acquire properties, according to Newsday.