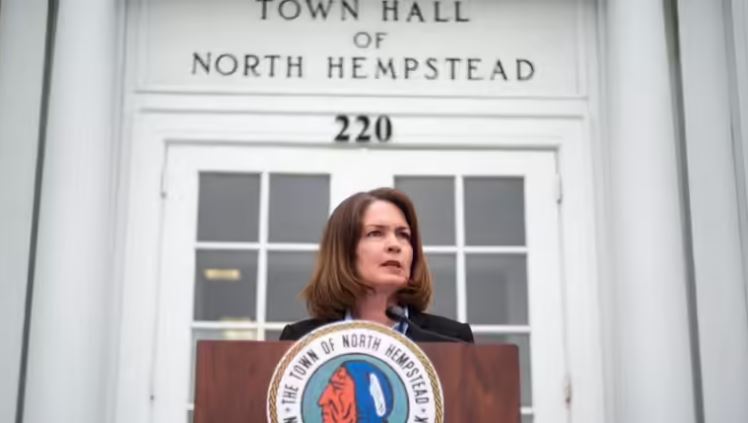 North Hempstead Supervisor Jennifer DeSena is proposing a measure that would remove the town board’s authority regarding the building department’s decision-making on expedited permit application reviews.

DeSena, a Republican nominee who campaigned on a platform to streamline the building department, said that after reviewing the town’s departments and operations during her first 80 days in office, she found the provision “grants an unheard-of level of power for individual board members” regarding an expedited permit application.

DeSena, who is set to give her first State of the Town Address on Thursday, said this will be the first in a series of reforms she will introduce to improve the building department.

“I’m hoping that in this case, the town board will put aside the partisan interest and support this measure because we all want building department reform,” DeSena said.

A resolution to set a public hearing date for April 28 will be introduced at Thursday’s board meeting. The proposed local law would also mandate that the building commissioner decide within seven days of receiving an expedited permit application.

To approve an expedited application review, the building commissioner must determine whether the request meets one or more of the stated criteria including to accommodate an emergency situation, advance public interest, is connected to an essential service or to avoid extreme financial hardship, the town code states.

Under current law, the board members, including the supervisor, have business five days to review the application and provide a recommendation. Their decision would prevail over the commissioner’s initial determination.

The provision was introduced in 2007, the same year a scandal rocked the department, leading to the indictment of ex-commissioner David Wasserman and others. Wasserman pleaded guilty and was sentenced to a year in jail.

Officials approved permits without the required inspections in exchange for favors, Nassau County prosecutors said at the time.

Councilmember Veronica Lurvey, a Democrat, noted that the building department does need reforms, but said it requires a comprehensive approach. DeSena’s proposal, she said, could be harmful to residents and business owners because the current procedure speeds the process up for many applicants.

“[The current law] gives council members the opportunity to do what they were put in office to do and that’s to advocate in those situations that merit an expedited review,” Lurvey said.

Lurvey said she’s interested in hearing from the public about the provision.

“I look forward to the exchange of ideas and opinions that take place in public both from the residents and town board members.”