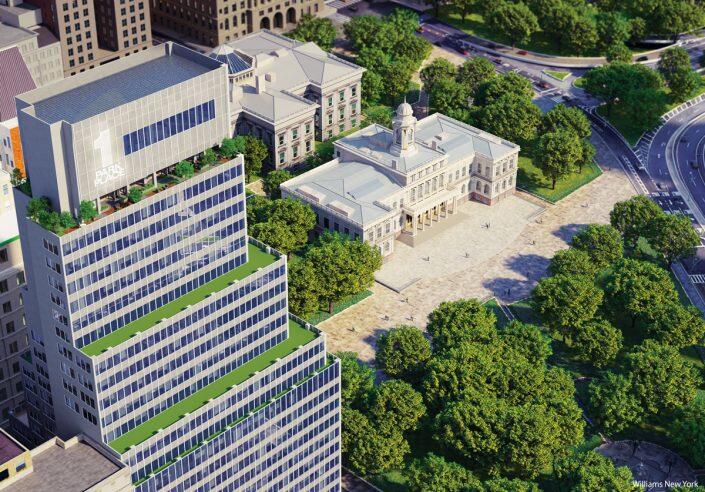 New York City’s office market increasingly resembles the demographics of the nation: a land of haves and have-nots, with a shrinking middle class.

Two years after the pandemic sent white-collar workers home, office buildings across the metro area were only 37 percent occupied, according to March 16 card swipe data from Kastle Systems, a popular index for office use. That includes “trophy” spaces occupied by the big banks that have pushed workers hardest to return.

Landlords don’t expect them to remain empty much longer. Companies still need dedicated workspace, they say, even if it serves a different purpose — as flexible, refined meeting places rather than 9-to-5 holding pens.

If tenants are going to commit to a long-term lease, they want that space to be special, Colp-Haber said. And while there are gems among the older stock, preference skews to the new and improved. Landlords either have it or they don’t.

“We’ve definitely never seen anything like this — even remotely,” Colp-Haber said of current office market conditions. “We’re in the midst of a bear market in commercial real estate in New York, and the Class B buildings are going to be bearing the brunt of it.”

The bifurcation between high- and low-quality space has been going on for years; the work-from-home boom only made the contrast more pronounced. Space that was once passable for companies that maintained large offices will no longer do as those firms redefine, and in most cases moderate, their workplace needs.

Among landlords of “value” properties, there is a belief that one can renovate one’s way into the upper echelon.

“I don’t see Class B as a business I want to be in,” said Jonathan Bennett, president of AmTrust Realty, which is overhauling 250 Broadway across from City Hall to attract a major tech tenant. “I want to be in the Class A business.”

Tony Malkin, chair and CEO of Empire State Realty Trust, maintains that the distinction between Class A and Class B has been “erroneously oversimplified,” and has framed his company’s largely Class B portfolio as part of the broader “flight to quality.”

Well-located, energy-efficient buildings with amenities are “critical in all price ranges,” Malkin said on an earnings call in February.

“We offer office space of these important attributes at rents that are accessible to the broadest population of tenants, not just those who can afford or want to pay triple digits for brand-new buildings,” he added.

New York’s creative industries like publishing and architecture, as well engineering firms and nonprofits, have historically been renters of Class B offices. And in recent years, medical businesses have taken up aging space vacated by typical Class A renters like banks and law firms.

Loft-style Class B space is a draw for tech and other tenants in submarkets like Midtown South, Flatiron and Soho. In those enclaves, demand is booming, according to Duval & Stachenfeld’s Eric Menkes, who represents owners like RXR Realty, Savanna and Jamestown in lease deals at B buildings.

“They’re hitting the ball out of the park right now, and that has absolutely nothing to do with the fact that the buildings are Class B buildings,” Menkes said, declining to offer specifics on rents. “These buildings are not going back to the bank.”

Pronounced softness in other submarkets, like the Garment District and Midtown, including whole stretches of Third Avenue, suggests Class B stock far outweighs demand.

The glut of space is due in part to downsizing flex-office companies, which took over much of the languishing lower-tier space as the business model boomed over the last decade, only to see demand evaporate during the pandemic, said Frank Wallach, executive managing director for research and business development at Colliers.

Over the last two years, WeWork, Knotel and similar firms have given back more than 4 million square feet of space, most of it Class B, he said.

“The question is, will there be enough demand in the post-Covid era to fill it up?” Wallach said. “What we’re seeing so far is the Class A and newer property is seeing the results first in the post-pandemic increase in demand.”

As tenants upgrade their offices, they are also taking less square footage — a consequence of hybrid work plans and column-free floors’ greater efficiency — causing softness in the market for even lower A-grade space in less central locations. Class A vacancy at year-end (17.9 percent) was higher than Class B vacancy (17.1 percent).

David Goldstein, branch manager of Savills’ New York office, described an ongoing “amenities arms race” among landlords below the top tier. On a recent tour of older buildings in Midtown, he and a prospective tenant played at guessing how many times the agent would say “amenity.”

“The reality is, a lot of the Class B stock has aged perhaps more quickly than anticipated,” Goldstein said. “Certain buildings just have physical limitations that can’t be overcome.”

For owners that could reposition an outdated property, there remains the issue of financing. Rising interest rates and construction and labor costs have made projects that won’t ultimately command top-dollar rents untenable. Lenders, sensing softness in the market, are hesitant to finance projects whose appeal to prospective tenants may be tenuous.

A possible future for Manhattan’s obsolescent Class B office buildings can be glimpsed in Lower Manhattan, where developers have converted millions of square feet to residential and hotel use over the last three decades. A similar transformation in Midtown would be challenging given the submarket’s larger floor plates, which are not as well suited for residential repurposing due to fresh air and light requirements, according to architect Mark Ginsberg of Curtis + Ginsberg Architects.

In the meantime, the central problem is demand, which experts say is markedly lower than it was before 2020 due in part to tenant migration outside New York.

Some Class B tenants became owners during the pandemic, when money was cheap and pricing made buying more attractive, according to Michael Rudder of Rudder Property Group, which specializes in the conversion and sale of New York office condos.

The company helped convert a “weak” Class B building at 35 West 36th Street to a “creative” office condo building during the pandemic, he said. The project was approved in January 2020 and is now effectively sold out.

“The whole project was a success,” Rudder said. “Had they done a leasing campaign, I think they would be dead in the water right now.”