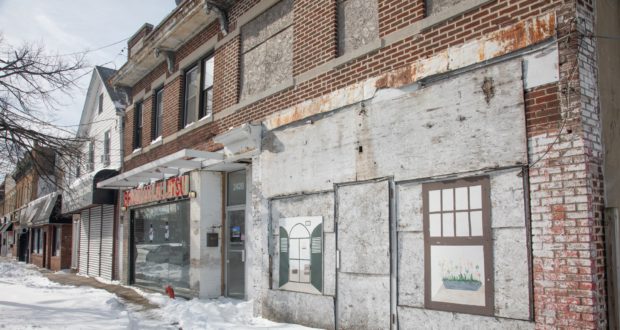 Years after the Town of Hempstead approved rezoning to allow for more development in three of its underperforming downtowns, the town board is seeking to impose a year-long moratorium on new projects in those areas.

The town has scheduled a public hearing for Tuesday, April 26 on the enactment of a building moratorium in the 87-acre Baldwin Mixed-Use Zoning Overlay District as well as other zoning overlay districts covering about 40 acres in Inwood and North Lawrence.

In a resolution passed on Tuesday, the town board cited concerns that the requisite environmental impact statements conducted to establish the new zoning districts, and previously accepted by the town, failed to take a “hard look” at potential negative impacts on infrastructure, transportation, public safety and special districts.

The proposed year-long moratorium would give the town board time to consider “potential amendments and/or alternatives” to the zoning districts, according to the resolution, to “insure the health, safety and welfare” of the town’s residents.

However, residents and business owners in the rezoned areas, some of whom have fought for years to get their downtown areas revitalized, were stunned by the town’s proposed moratorium.

Darien Ward, president of the Baldwin Civic Association, said he believes the state environmental review completed prior to the Baldwin rezoning was done appropriately for the 87 acres it covered and that the town’s argument is hollow.

The civic association had sent a letter to the town board last month urging it to establish the Design Review Board, a requirement that the town imposed before new development projects could be approved in the overlay district.

“Instead of them replying to our letter directly, and trying to be a partner with us, they are trying to go ahead with this moratorium and did not even alert us that this is where their thinking was,” Ward told LIBN.

Community leaders have been working for decades to try to kick start revitalization efforts in Baldwin’s tired business district. After the overlay zoning district was enacted, the town was awarded a $10 million Downtown Revitalization Initiative grant from the state in 2019. Now several developers are poised to invest hundreds of millions of dollars on projects aimed at creating rental housing and new commercial space along 1.4 miles of the Grand Avenue corridor that stretches from Merrick Road to Stanton Avenue.

But advocates say the year-long moratorium sought by the town could derail Baldwin’s comeback.

“This type of planning and local determination has nothing to do with recent efforts in Albany to overrule local zoning and create apartments everywhere without community input,” Alexander said. “What it does do is revitalize and make viable many properties and vacant storefronts that have been hard hit through the pandemic based on the wishes of the community. We hope that any action the Town of Hempstead takes moves the many community and development projects forward that adhere to the code and have been waiting for final approval for a very long time.”

Erik Mahler, past president of the Baldwin Chamber of Commerce, was a little more blunt in expressing his disappointment with the town’s proposed moratorium.

“I’ve been involved since 1998 with the same exact nonsense,” Mahler said. “You get close and then the rug is pulled out from under you. We want development, we want building in Baldwin, we are in favor of any and all development in Baldwin.”

Mahler also questioned the town’s reasoning that the environmental reviews conducted prior to the rezoning were not comprehensive enough.

“They had a million meetings, engineering firms got paid a lot of money, and I’d imagine they got it done properly,” he said. “There were a lot of engineers and other people working on this.”

The town’s proposed moratorium would exempt development projects that have already applied to the town and any that have already received permits. However, when asked about which projects would be excluded from the building ban, a town spokesman has yet to respond.

The moratorium would also put a halt to development in two zoning districts in Inwood and North Lawrence, including the Neighborhood Business Overlay District and the Transit-Oriented Development District, both of which require some affordable housing components.

The Neighborhood Business Overlay District covers about 5 acres mostly on Lawrence Avenue between Mill Street and Mott Avenue, and about 13.8 acres located mostly on Doughty Boulevard between Bayview Avenue and Mott Avenue. The intent of the zoning was to create a main street that meets the demand for mixed-use development and incorporates housing and commercial uses in a walkable environment.

The Transit Oriented Development District encompasses about 11.7 acres near the Lawrence Long Island Rail Road station and about 9 acres near the Inwood LIRR station. The new zoning was designed to allow for the redevelopment of light industrial and manufacturing uses adjacent in the area to encourage a “mix of housing and commercial uses” that will “sustain vibrant flourishing hamlet centers,” according to the town’s plan.

If the town enacts its moratorium, any projects proposed for those areas and not already applied for will be put on hold.

David Hance, president of the Inwood Civic Association, said he will be attending the town’s public hearing on the moratorium to get more information and see what some of the concerns are.

“At this point, I would not want to see a moratorium put on it,” Hance said. “I’m more in favor of working with the community on a case-by-case basis to mitigate any potential impacts. We were big supporters of the transit-oriented development initiative and we still think it could be a good thing for our community.”

Mitch Pally, CEO of the Long Island Builders Institute, said that while the town may want to “re-evaluate” some of the environmental review requirements that are inherent in the zoning changes, “we should remain committed to those zoning changes” which the town has already done.

“We want to make sure that the town does not go backwards in the development of a variety of new housing options which they’ve already approached,” Pally said.

Back in Baldwin, Frank Jorge, the current president of the Baldwin Chamber of Commerce and owner of the GalaFresh Farms market on Grand Avenue, said he is disappointed with the town’s proposed moratorium.

“It’s a very big step back for all of Baldwin,” he said.